Eighty-seven percent of baby boomers born in the years 1957–1964 had married at least once by the time they reached age 46. Of those who had married, 45 percent had experienced at least one divorce. There were some notable differences in marriage and divorce patterns between men and women and among educational attainment groups. 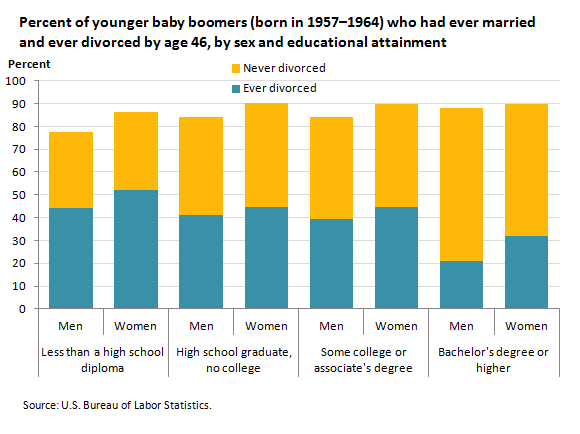 Men and women with at least a bachelor’s degree were about equally likely to marry by age 46 (90 percent and 88 percent, respectively). At all lower levels of education, women were more likely than men to marry.

For both men and women who had married, those with a bachelor’s degree were much less likely to have divorced than were men and women with less education. The differences were larger for men than for women, however. Among men who had married, those who had not completed high school were more than twice as likely to have divorced as those who had completed at least a bachelor’s degree. This difference was roughly half as large among women.

These data are from the National Longitudinal Surveys program. To learn more, see “Marriage and divorce: patterns by gender, race, and educational attainment,” by Alison Aughinbaugh, Omar Robles, and Hugette Sun in the Monthly Labor Review, October 2013. The article examines the marital histories of men and women in the National Longitudinal Survey of Youth 1979. These men and women were born in the years 1957 to 1964 and lived in the United States when the survey began in 1979.