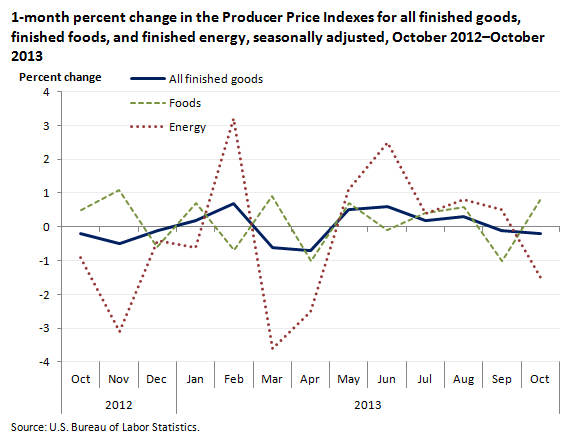 Prices for finished energy goods moved down 1.5 percent in October, the first decline since a 2.5-percent drop in April 2013. Nearly all of the October decrease can be traced to the index for gasoline, which fell 3.8 percent.

In October, prices for finished consumer foods advanced 0.8 percent, the largest rise since a 0.9-percent jump in March 2013. Nearly sixty percent of the October increase can be traced to the index for beef and veal, which climbed 7.5 percent.

The index for finished goods less food and energy rose 0.2 percent in October, following a 0.1-percent increase in September.

These data are from the BLS Producer Price Index program. To learn more, see “Producer Price Indexes — October 2013” (HTML) (PDF), news release USDL‑13‑2195. All producer price indexes are routinely subject to revision once, 4 months after the original publication, to reflect the availability of late reports and corrections by respondents.