The 2014 Winter Olympic Games take place in Sochi, Russia, February 6–23. The Games feature events in 15 winter sports. The winner of each event receives a gold medal, and the second- and third-place finishers receive silver and bronze medals. Gold medals are not pure gold (they are mostly silver), and silver medals are not pure silver, either. Bronze is mostly copper. This edition of The Editor’s Desk looks at trends in gold, silver, and copper prices. 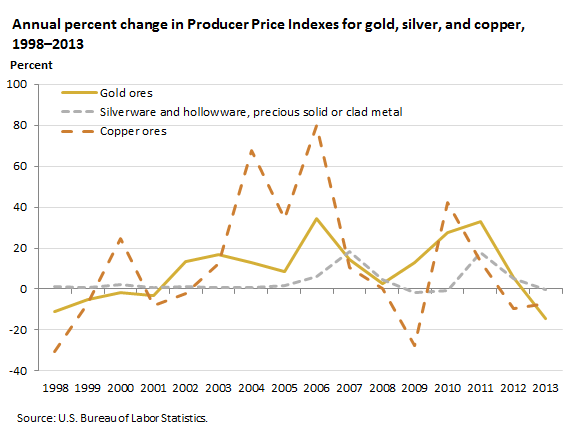 These data are from the BLS Producer Price Indexes program and are not seasonally adjusted. Producer prices for silver refer to prices received by producers in the manufacturing industry called "silverware and hollowware, precious solid or clad metal." This industry includes the manufacture of eating utensils, sugar bowls, creamers, platters, butter plates, and other table-related items that are silver, silver-clad, or pewter. This price index is not strictly comparable to those for gold ores and copper ores, which are mined commodities rather than manufactured products. A Producer Price Index for silver ores is not available because there is not enough U.S. production of silver ore to support the calculation of an index.