Productivity in the information industry, 1987–2012

The information industry has transformed markedly over the last quarter century. The number of people using computers, the Internet, mobile phones, and other electronic devices at work, school, home, and elsewhere has grown tremendously. This transformation is apparent in BLS measures of productivity. Labor productivity in the software publishing industry grew at an average rate of 12.5 percent per year from 1987 to 2012. At the other end of the spectrum, labor productivity among newspaper publishers declined at an average annual rate of 1.0 percent over the same period. 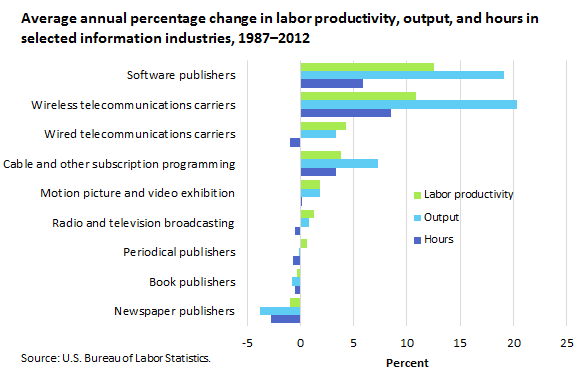 Wireless telecommunications carriers experienced productivity growth of 10.9 percent annually from 1987 to 2012, a result of output growing 20.3 percent per year and hours growing 8.5 percent per year.