Detroit Area At A Glance

Total nonfarm employment for the Detroit-Warren-Dearborn Metropolitan Statistical Area stood at 2,037,400 in September 2019, essentially unchanged over the year, the U.S. Bureau of Labor Statistics reported today. During the same period, the national job count increased 1.4 percent. Assistant Commissioner for Regional Operations Charlene Peiffer noted that this was the second time since May 2010 that the Detroit metropolitan area had no over-the-year percentage change in employment. (See chart 1 and table 1; the Technical Note at the end of this release contains metropolitan area definitions. All data in this release are not seasonally adjusted; accordingly, over-the-year analysis is used throughout.) 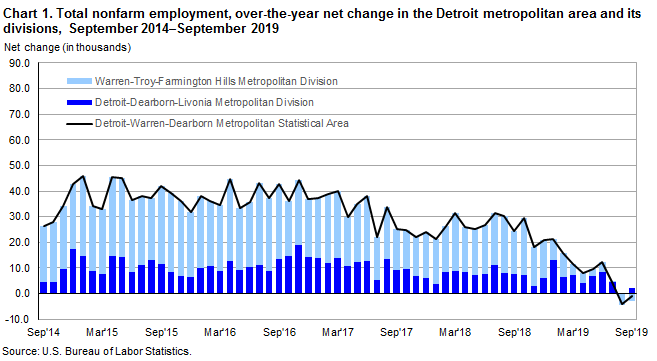 In the Detroit metropolitan area, leisure and hospitality added the largest number of jobs from September 2018 to September 2019, up 4,400. Local employment in the leisure and hospitality supersector increased 2.2 percent over the year; nationally, employment in this sector rose 2.0 percent. (See chart 2.) Local job gains were concentrated in the Warren division, up 3,500 from the previous September.

Mining, logging, and construction had the second largest employment increase in the Detroit area, up 3,500 jobs over the year. The 4.5-percent rate of job growth was the highest among the local area supersectors that posted annual employment gains since last September. While both divisions added jobs, the rate of job growth was faster-paced in the Detroit division (+7.1 percent) compared to the Warren division (+3.3 percent).

Three supersectors in the Detroit area lost more than 1,000 jobs since September 2018: manufacturing, education and health services, and professional and business services. Locally, manufacturing lost 7,200 jobs, down 2.7 percent. The Detroit area’s education and health services supersector lost 4,800 jobs, a 1.5-percent decrease. Professional and business services lost 2,500 jobs locally, a 0.6-percent decrease over the year. Nationally, employment in these supersectors increased over the year.

Metropolitan area employment data for October are scheduled to be released on Tuesday, November 19, 2019.

More complete information on the technical procedures used to develop these estimates and additional data appear in Employment and Earnings, which is available online at www.bls.gov/opub/ee/home.htm. Industry employment data for states and metropolitan areas from the Current Employment Statistics program are also available in the above mentioned news releases and from the Internet at www.bls.gov/sae.