Employment decreased in 11 of Illinois’ 13 large counties from December 2017 to December 2018, the U.S. Bureau of Labor Statistics reported today. (Large counties are defined as those with 2017 annual average employment levels of 75,000 or more.) Assistant Commissioner for Regional Operations Charlene Peiffer noted that McHenry County had the largest percentage decrease in employment at 1.2 percent, followed by McLean (-1.1 percent) and Madison (-1.0 percent). Two counties had over-the-year percentage increases in employment, both less than 1.0 percent. (See table 1.)

Employment and wage levels (but not over-the-year changes) are also available for the 89 counties in Illinois with employment levels below 75,000. Eighty-eight of these smaller counties had average weekly wages below the national average. (See table 2.)

Average weekly wages in 12 of the 13 large counties in Illinois increased from the fourth quarter of 2017 to the fourth quarter of 2018. Winnebago County’s 7.6-percent increase in average weekly wages was the largest among the state’s large counties and ranked 10th nationwide. Madison (5.7 percent, 31st), Cook (3.7 percent, 104th), DuPage (3.6 percent, 113th), and Lake (3.6 percent, 113th) Counties had over-the-year wage increases that ranked in the top-third nationwide. (See table 1.)

Eighty-eight of the 89 counties in Illinois with employment below 75,000 had average weekly wages lower than the national average of $1,144. The exception was Rock Island ($1,292). Calhoun County reported the lowest weekly wage in the state, averaging $509 in the fourth quarter of 2018. (See table 2.)

The BLS Local Data app, first released for iPhones last fall, is now available for Android devices. Search using your current location, a zip code, or a location name to find employment and wage data for detailed industries and occupations. BLS continues to partner with the U.S. Department of Labor’s Office of the Chief Information Officer to expand the features and data in the app. For more information please visit: https://beta.bls.gov/labs/blogs/2019/04/17/bls-local-data-app-now-available-for-android-devices. 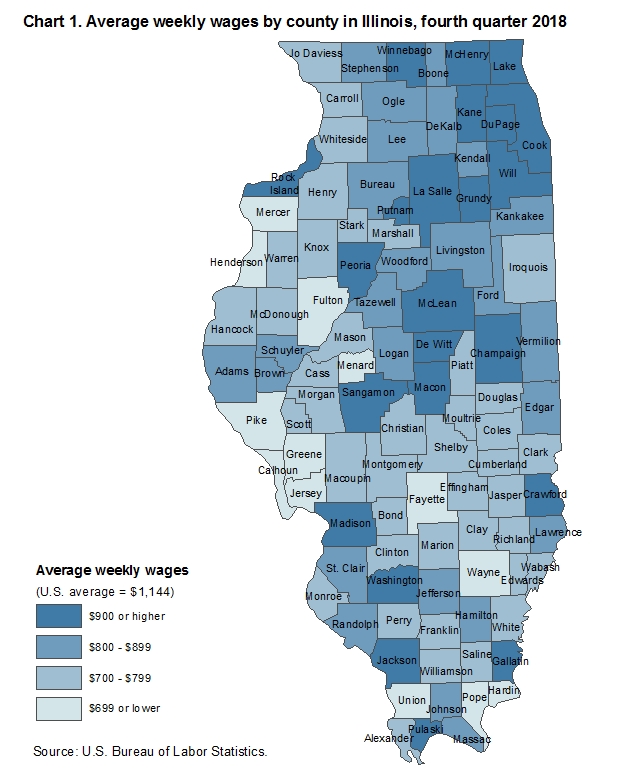