Employment increased in 9 of the 10 large counties in Michigan from December 2017 to December 2018, the U.S. Bureau of Labor Statistics (BLS) reported today. (Large counties are defined as those with 2017 annual average employment levels of 75,000 or more.) Assistant Commissioner for Regional Operations Charlene Peiffer noted that Kent County had the largest increase, up 1.8 percent, followed by Ottawa County, up 1.2 percent. (See table 1.)

Employment and wage levels (but not over-the-year changes) are also available for the 73 counties in Michigan with employment levels below 75,000. With the exception of Kalkaska County ($1,192), all smaller counties had average weekly wages below the national average. (See table 2.)

All of Michigan’s large counties had over-the-year wage gains, with one county’s wage growth greater than the national increase of 3.2 percent. (See table 1.) Washtenaw County’s 3.4-percent increase in average weekly wages was the largest among the state’s large counties and ranked 137th nationwide. Kalamazoo (3.2 percent, 155st) and Saginaw (3.1 percent, 164th) had over-the-year wage increases that ranked in the top-half nationwide.

Nationally, 332 of the 349 largest counties had over-the-year wage growth. Tippecanoe, IN, had the largest fourth-quarter over-the-year wage gain at 15.1 percent. Williamson, TN, was second with a wage increase of 13.1 percent, followed by Olmsted, MN, at 13.0 percent. 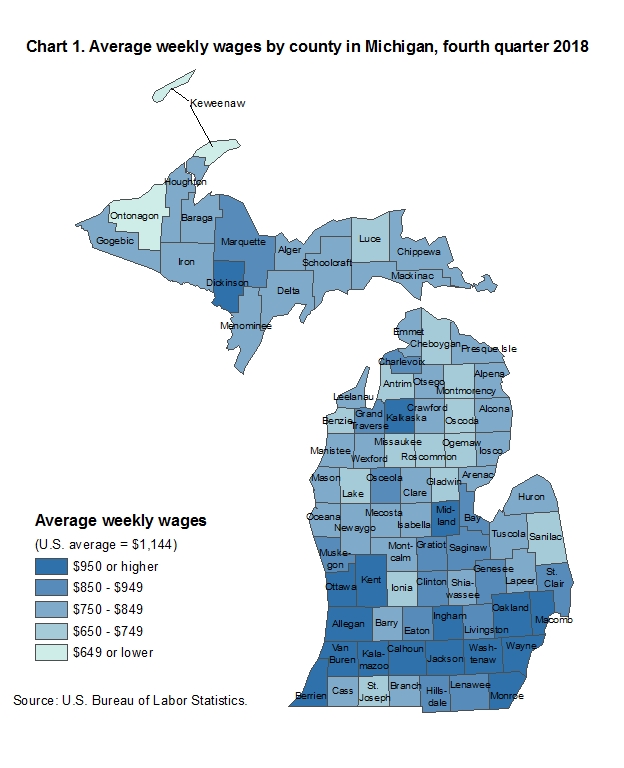