Employment increased in 9 of Ohio’s 14 large counties from March 2018 to March 2019, the U.S. Bureau of Labor Statistics reported today. (Large counties are those with annual average employment levels of 75,000 or more in 2018.) Assistant Commissioner for Regional Operations Charlene Peiffer noted that employment gains ranged from 3.3 percent in Warren County to 0.6 percent in Cuyahoga County. (See table 1.)

Employment and wage levels (but not over-the-year changes) are also available for the 74 counties in Ohio with 2018 average annual employment levels below 75,000. Average weekly wages in these counties ranged from $1,075 to $588. (See table 2.)

In the first quarter of 2019, 9 of Ohio’s 14 largest counties had over-the-year wage gains above the national average of 2.8 percent. Hamilton and Warren Counties (5.9 percent) had the highest wage gains and ranked 10th among the 355 largest counties nationwide. In contrast, Lucas County had an over-the-year wage decline, down 0.3 percent, and ranked 332nd nationally. (See table 1.)

Employment and Wages Annual Averages Online features comprehensive information by detailed industry on establishments, employment, and wages for the nation and all states. The 2018 edition of this publication contains selected data produced by Business Employment Dynamics (BED) on job gains and losses, as well as selected data from the first quarter 2019 version of the national news release. Tables and additional content from Employment and Wages Annual Averages are now available online at www.bls.gov/cew/publications/employment-and-wages-annual-averages/2018/home.htm. 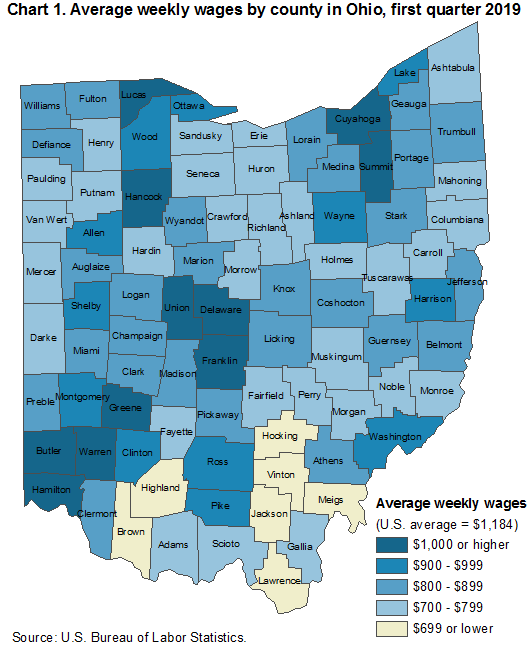