Local Rate of Employment Growth Similar to the National Average

Total nonfarm employment for the Atlanta-Sandy Springs-Roswell, GA, Metropolitan Statistical Area stood at 2,848,100 in August 2019, up 42,500, or 1.5 percent, over the year, the U.S. Bureau of Labor Statistics reported today. During the same period, the national rate of job growth was 1.4 percent. Regional Commissioner Janet S. Rankin noted that the Atlanta area has had over-the-year employment gains each month since July 2010. (See chart 1 and table 1; the Technical Note at the end of this release contains metropolitan area definitions. All data in this release are not seasonally adjusted; accordingly, over-the-year analysis is used throughout.) 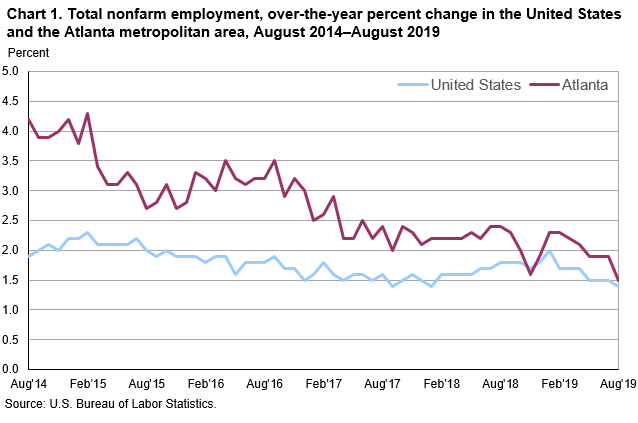 In the Atlanta metropolitan area, the leisure and hospitality industry had the largest employment gain from August 2018 to August 2019, up 14,500, or 4.8 percent. Local job gains occurred primarily in the food services and drinking places subsector (+11,600). Nationwide, employment in the leisure and hospitality industry rose 1.8 percent over the year. (See chart 2.)

Five other supersectors in the Atlanta area gained jobs since August 2018: construction, manufacturing, government, financial activities, and trade, transportation, and utilities. Over the year employment gains for these five local industry sectors ranged from 6,100 to 1,100.

Since August 2018, the other services supersector in the Atlanta area lost 3,300 jobs, down 3.2 percent over the 12 months. Over the year, U.S. employment in other services was up 1.6 percent.

Atlanta-Sandy Springs-Roswell was 1 of the nation’s 12 largest metropolitan statistical areas in August 2019. All 12 areas had over-the-year job growth during the period, with the rates of job growth in 6 areas exceeding the national average of 1.4 percent. The largest over-the-year percentage gains in employment occurred in Dallas-Fort Worth-Arlington (+3.1 percent), and in Houston-The Woodlands-Sugarland and Phoenix-Mesa-Scottsdale (+2.7 percent each). Chicago-Naperville-Elgin and Washington-Arlington-Alexandria had the slowest rates of job growth, (+1.0 percent each). (See chart 3 and table 2.)

New York-Newark-Jersey City added the largest number of jobs over the year, 134,200, followed by Dallas with 115,800 jobs. Washington had the smallest employment gain over the year, adding 33,600 jobs, followed by Boston-Cambridge-Nashua with 39,600 jobs. Annual gains in the remaining eight metropolitan areas ranged from 81,900 in Houston to 41,500 in Philadelphia-Camden-Wilmington.

Metropolitan area employment data for September 2019 are scheduled to be released on Friday, October 18, 2019.

Definitions. Employment data refer to persons on establishment payrolls who receive pay for any part of the pay period which includes the 12th of the month. Persons are counted at their place of work rather than at their place of residence; those appearing on more than one payroll are counted on each payroll. Industries are classified on the basis of their principal activity in accordance with the 2017 version of the North American Industry Classification System.

Annual revisions. Employment estimates are adjusted annually to a complete count of jobs, called benchmarks, derived principally from tax reports which are submitted by employers who are covered under state unemployment insurance (UI) laws. The benchmark information is used to adjust the monthly estimates between the new benchmark and the preceding one and also to establish the level of employment for the new benchmark month. Thus, the benchmarking process establishes the level of employment, and the sample is used to measure the month-to-month changes in the level for the subsequent months.

Reliability of the estimates. The estimates presented in this release are based on sample survey and administrative data and thus are subject to sampling and other types of errors. Sampling error is a measure of sampling variability—that is, variation that occurs by chance because a sample rather than the entire population is surveyed. Survey data are also subject to nonsampling errors, such as those which can be introduced into the data collection and processing operations. Estimates not directly derived from sample surveys are subject to additional errors resulting from the special estimation processes used. The sums of individual items may not always equal the totals shown in the same tables because of rounding.