Gasoline prices averaged $2.541 a gallon in the Atlanta-Sandy Springs-Roswell area in September 2019, the U.S. Bureau of Labor Statistics reported today. Regional Commissioner Janet S. Rankin noted that area gasoline prices were 22.1 cents less than last September when they averaged $2.762 per gallon. Atlanta area households paid an average of 14.5 cents per kilowatt hour (kWh) of electricity in September 2019, higher than the 12.6 cents per kWh paid in September 2018. The average cost of utility (piped) gas at $1.744 per therm in September was similar to the $1.713 per therm spent last year. (Data in this report are not seasonally adjusted. Accordingly, month-to-month changes reflect the impact of seasonal influences.) 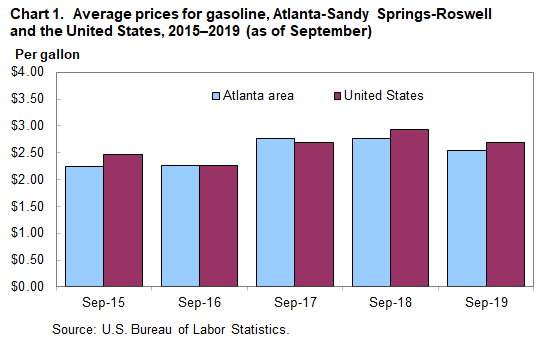 The 14.5 cents per kWh Atlanta households paid for electricity in September 2019 was 4.3 percent more than the nationwide average of 13.9 cents per kWh. Last September, electricity costs in Atlanta were 8.7 percent less than the U.S. average. (See chart 2.) 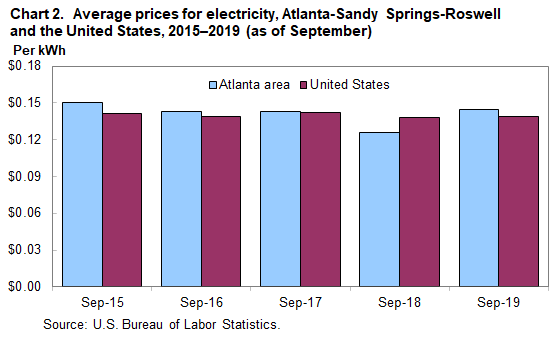 Prices paid by Atlanta area consumers for utility (piped) gas, commonly referred to as natural gas, were $1.744 per therm, or 71.1 percent higher than the national average in September 2019 ($1.019 per therm). A year earlier, area consumers paid 66.3 percent more per therm for natural gas compared to the nation. In each of the past 5 years, the per therm cost for natural gas in September for Atlanta households was at least 54 percent more than the U.S. average. (See chart 3.) 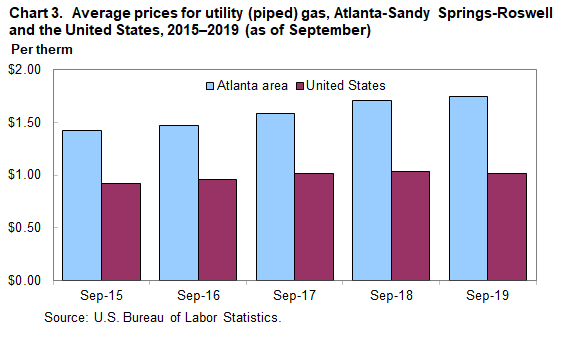 The Consumer Price Index for October 2019 is scheduled to be released on Wednesday, November 13, 2019.