Area prices down 0.2 percent since August; up 3.0 percent over the year

The Consumer Price Index for All Urban Consumers (CPI-U) for Atlanta-Sandy Springs-Roswell edged down 0.2 percent from August to October, the U.S. Bureau of Labor Statistics reported today. Regional Commissioner Janet S. Rankin noted that the energy index declined 6.9 percent over the bi-monthly period. Since August, the all items less food and energy index increased 0.5 percent and the food index rose 0.3 percent. (Data in this report are not seasonally adjusted. Accordingly, bi-monthly changes may reflect the impact of seasonal influences.)

From October 2018 to October 2019, the all items CPI-U increased 3.0 percent. Over the year, the index for all items less food and energy advanced 3.5 percent and the food index rose 2.3 percent. In contrast, the energy index declined 0.5 percent over the past 12 months. (See chart 1 and table 1.) 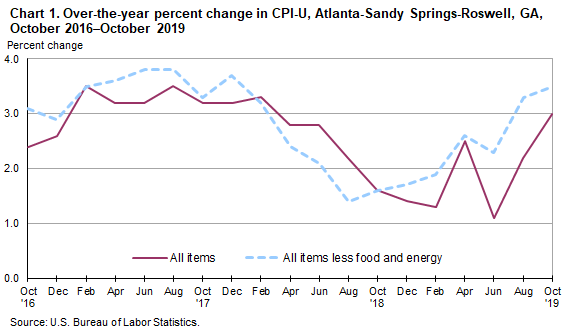 The food index rose 0.3 percent from August to October, led by a 0.6-percent increase in the food away from home index. The food at home index was unchanged over the bi-monthly period.

The food index advanced 2.3 percent for the 12 months ending October 2019, reflecting increases in the food away from home (3.5 percent) and the food at home (1.3 percent) indexes.

The energy index fell 6.9 percent from August to October, led by a seasonal decline in the electricity index (-17.6 percent). The gasoline index fell 1.5 percent since August, while the utility (piped) gas service index rose 1.1 percent.

The energy index declined 0.5 percent over the past 12 months, reflecting an 11.4-percent drop in the gasoline index. Since October 2018, the electricity index advanced 22.5 percent and the utility (piped) gas service index rose 2.7 percent.

The index for all items less food and energy rose 0.5 percent from August to October. Increases were noted for several categories including shelter (0.5 percent), household furnishings and operations (3.3 percent) and medical care (1.9 percent). In contrast, recreation (-3.1 percent) and new and used motor vehicles (-1.6 percent) were among the indexes to decline over the bi-monthly period.

From October 2018 to October 2019, the index for all items less food and energy advanced 3.5 percent. Several indexes contributed to the increase, most notably shelter (5.0 percent) and medical care (9.6 percent).