Area prices up 0.4 percent since August and 1.5 percent over the year

The Consumer Price Index for All Urban Consumers (CPI-U) for Miami-Fort Lauderdale-West Palm Beach increased 0.4 percent from August to October, the U.S. Bureau of Labor Statistics reported today. Regional Commissioner Janet S. Rankin noted that the all items less food and energy index rose 0.6 percent over the bi-monthly period. Since August, the energy index inched up 0.1 percent, while the food index fell 0.4 percent. (Data in this report are not seasonally adjusted. Accordingly, bi-monthly changes may reflect the impact of seasonal influences.)

From October 2018 to October 2019, the all items CPI-U rose 1.5 percent. Over the year, the index for all items less food and energy advanced 2.4 percent and the food index rose 1.0 percent. In contrast, the energy index declined 6.3 percent over the past 12 months. (See chart 1 and table 1.) 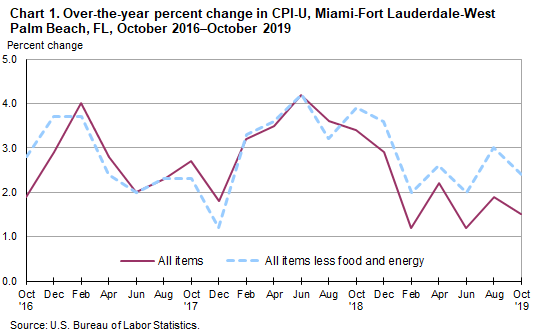 The food index fell 0.4 percent from August to October, reflecting a 0.9-percent decrease in the food at home index. The food away from home index increased 0.4 percent over the bi-monthly period.

The food index rose 1.0 percent for the 12 months ending October 2019. The food away from home index increased 2.2 percent over the year, while the food at home index was little changed, up 0.1 percent.

The energy index inched up 0.1 percent from August to October. The gasoline and the electricity indexes were little changed from August, up 0.1 and 0.2 percent, respectively.

Over the year, the energy index declined 6.3 percent, fueled by a 12.0-percent drop in the gasoline index. In contrast, the electricity index increased 1.6 percent since October 2018.

The index for all items less food and energy advanced 2.4 percent from October 2018 to October 2019. The shelter index contributed to the increase, up 3.4 percent.

The Miami-Fort Lauderdale-West Palm Beach, FL, Core Based Statistical Area covered in this release is comprised of Broward, Miami-Dade, and Palm Beach Counties in Florida.