Employment decreased in Mississippi’s two large counties from June 2017 to June 2018, the U.S. Bureau of Labor Statistics reported today. (Large counties are defined as those with employment of 75,000 or greater as measured by 2017 annual average employment.) Regional Commissioner Janet S. Rankin noted that Harrison and Hinds Counties each had an employment decline of 0.5 percent during the 12-month period. (See table 1.)

Employment and wage levels (but not over-the-year changes) are also available for the 80 counties in Mississippi with employment below 75,000. Average weekly wages in these counties ranged from $1,201 to $460. (See table 2.)

Nationally, 340 of the 349 largest counties had over-the-year increases in average weekly wages in the second quarter of 2018. Marin, CA, had the largest over-the-year wage gain at 11.7 percent, followed by Lake, IL, and King, WA (9.3 percent each).

Among the 80 smaller counties in Mississippi with employment below 75,000, Claiborne ($1,201) was the only county with an average weekly wage above the national average of $1,055. Issaquena County had the lowest weekly wage in the state, averaging $460 in the second quarter of 2018. (See table 2.)

BLS has partnered with the U.S. Department of Labor's Office of the Chief Information Officer to develop a new mobile app for iPhones. The BLS Local Data app is ideal for customers, such as jobseekers and economic and workforce development professionals, who want to know more about local labor markets. For more information, please go to: https://blogs.bls.gov/blog/2018/10/18/new-bls-local-data-app-now-available/ 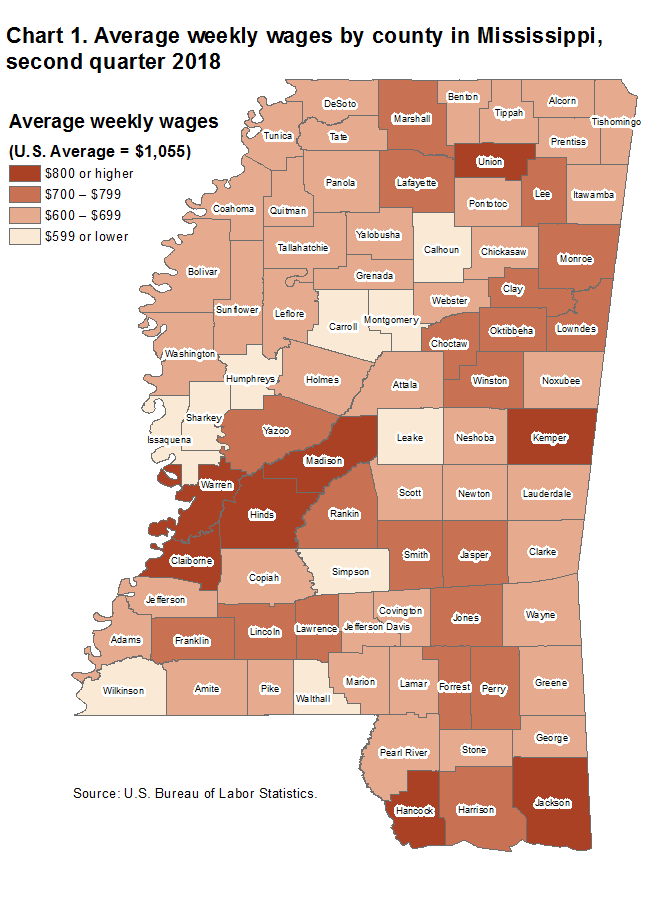