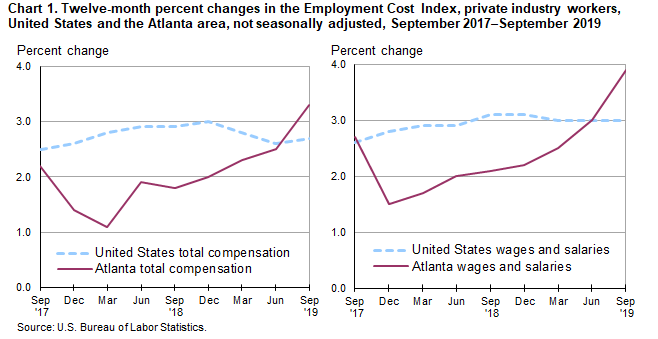 Atlanta is 1 of 15 metropolitan areas in the United States and 1 of 5 areas in the South region of the country for which locality compensation cost data are now available. Among these 15 largest areas, over-the-year percentage changes in the cost of compensation ranged from 3.8 percent in New York to 1.7 percent in both Houston and Philadelphia in September 2019; for wages and salaries, annual changes ranged from 4.2 percent in Los Angeles to 1.5 percent in Houston. (See chart 2.)

Locality compensation costs are part of the national Employment Cost Index (ECI), which measures quarterly changes in compensation costs, which include wages, salaries and employer costs for employee benefits. In addition to the 15 locality estimates provided in this release, ECI data for the nation, 4 geographical regions, and 9 geographical divisions are available. (Geographical definitions for the metropolitan areas mentioned in this release are included in the Technical Note.)

In addition to the geographic data, a comprehensive national report is available that provides data by industry, occupational group, and union status, as well as for both private, and state and local government employees. The release is available on the Internet at www.bls.gov/ncs/ect/home.htm. Current and historical information from other Bureau programs may be accessed via our regional homepage at www.bls.gov/regions/southeast/.

The Employment Cost Index for December 2019 is scheduled to be released on Friday, January 31, 2020.