Fatal work injuries totaled 194 in 2017 for Georgia, the U.S. Bureau of Labor Statistics reported today. Regional Commissioner Janet S. Rankin noted that the number of work-related fatalities in Georgia was up from 171 in the previous year. Fatal occupational injuries in the state have ranged from a high of 249 in 1994 to a low of 101 in 2012. (See chart 1.)

Nationwide, a total of 5,147 fatal work injuries were recorded in 2017, down slightly from the 5,190 fatal injuries reported in 2016, according to results from the Census of Fatal Occupational Injuries (CFOI) program. 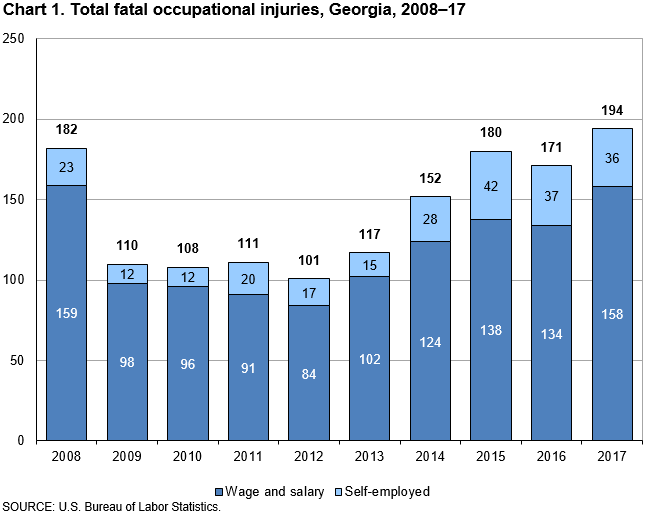 In Georgia, transportation incidents resulted in 96 fatal work injuries, up from 76 in 2016, and accounted for about half (49 percent) of all workplace fatalities. (See table 1.) Violence and other injuries by persons or animals was the second-most frequent fatal event in Georgia with 30 fatalities, followed by falls, slips, or trips (27). 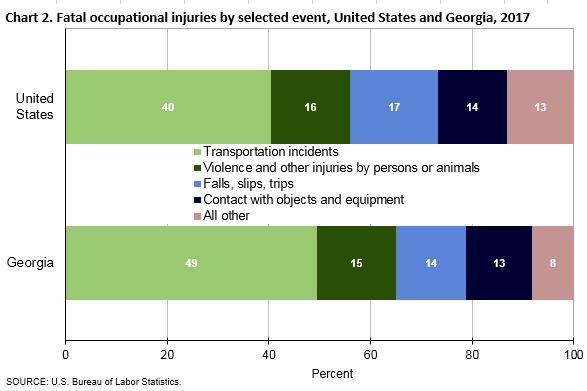 The private transportation and warehousing sector had the largest number of fatalities in Georgia with 39, little changed from the previous year. (See table 2.) General freight trucking accounted for 18, or 46 percent, of the fatal injuries in this industry.

The private construction sector had 34 workplace fatalities, similar to the count in the previous year. Twenty-two, or 65 percent, of those fatally injured in this industry worked in the specialty trade contractors subsector.

Background of the program. The Census of Fatal Occupational Injuries (CFOI), part of the Bureau of Labor Statistics (BLS) Occupational Safety and Health Statistics (OSHS) program, compiles a count of all fatal work injuries occurring in the U.S. during the calendar year. The CFOI program uses diverse state, federal, and independent data sources to identify, verify, and describe fatal work injuries. This ensures counts are as complete and accurate as possible. For the 2017 national data, over 23,400 unique source documents were reviewed as part of the data collection process. For the Georgia 2017 data, 921 unique source documents were reviewed. For technical information and definitions for CFOI, please go to the BLS Handbook of Methods on the BLS website at www.bls.gov/opub/hom/cfoi/home.htm.