In 2018, the broadest measure of labor underutilization, designated U-6 (which includes the unemployed, workers employed part time for economic reasons, and those marginally attached to the labor force), was 7.6 percent in Florida, not significantly different from the 7.7-percent rate for the nation, the U.S. Bureau of Labor Statistics reported today. Regional Commissioner Janet S. Rankin noted that all six alternative measures of labor underutilization in Florida were significantly lower from a year ago. Nationally, all six measures had significant declines over the year. (See table 1.)

The official concept of unemployment, U-3 in the U-1 to U-6 range of measures, includes all jobless persons who are available to take a job and have actively sought work in the past 4 weeks. In Florida, 3.6 percent of the labor force was unemployed as measured by U-3 in 2018, not measurably different than the 3.9-percent rate for the nation. (See chart 1.) (The official measure of unemployment in the states is derived using a statistical model that incorporates data from the Current Population Survey [CPS] and other sources, and this model-based estimate can differ from the direct CPS estimate discussed here.) 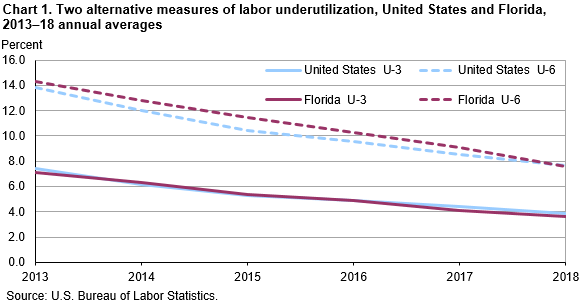 Florida had 369,100 unemployed residents in 2018 according to the CPS. In addition, there were 319,800 workers who were employed part time for economic reasons (also known as involuntary part time). These individuals were working part time because of slack work or business conditions, or because they were unable to find a full-time job. (See chart 2.) Nationwide, there were 4.8 million individuals working part time for economic reasons in 2018. 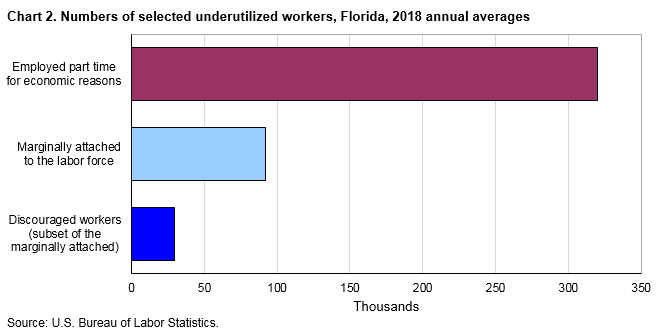