In 2007, 46,000 hourly paid workers earned the prevailing federal minimum wage or less in North Carolina, the lowest level since data were first available in 2000. The 46,000 workers in this category accounted for 2.1 percent of all hourly paid workers in the state. (See chart 1.) In 2007, the federal minimum wage began increasing after holding steady for nearly a decade. Two additional increases in the federal minimum wage followed, resulting in more North Carolina workers falling into this category, peaking at 168,000 in 2010. That number has declined in five of the past six years. 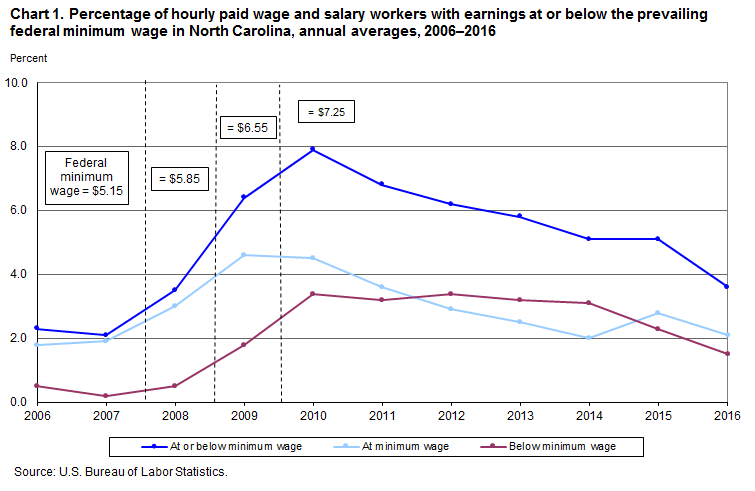 Of the 91,000 workers earning the federal minimum wage or less in North Carolina in 2016, 58,000, or 63.7 percent, were women. These women represented 4.6 percent of all women paid hourly rates in the state. Men accounted for 33,000, or 36.3 percent, of all North Carolina workers earning the prevailing minimum wage or less; they made up 2.6 percent of men who were paid hourly rates. (See table 2.) 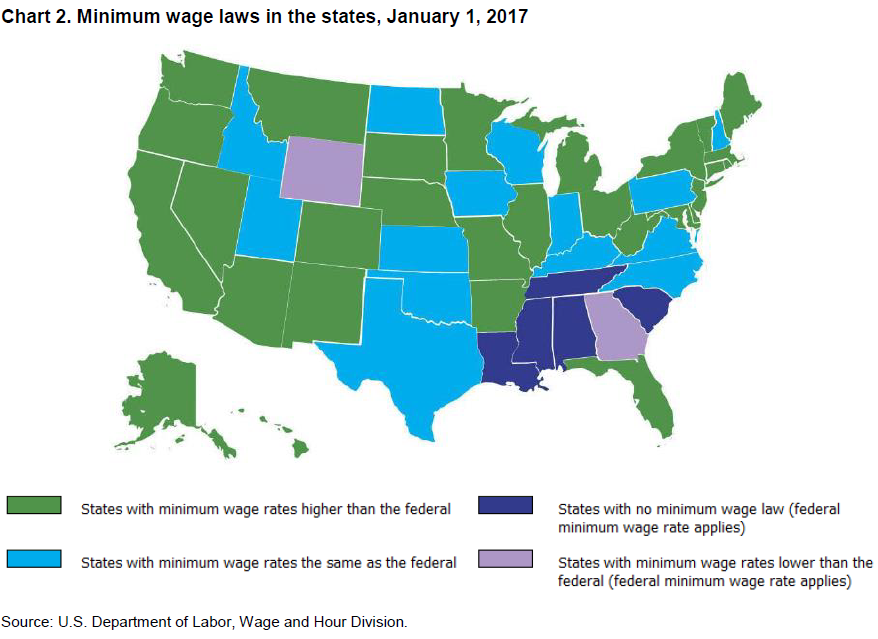 The estimates in this release were obtained from the Current Population Survey (CPS), which provides information on the labor force, employment, and unemployment. The survey is conducted monthly for the U.S. Bureau of Labor Statistics (BLS) by the U.S. Census Bureau using a scientifically selected national sample of about 60,000 eligible households in all 50 states and the District of Columbia. The survey also provides data on earnings, which are based on one-fourth of the CPS monthly sample and are limited to wage and salary workers. All self-employed workers, both incorporated and unincorporated, are excluded from these earnings estimates.

Statistics based on the CPS are subject to both sampling and nonsampling error. When a sample, rather than the entire population, is surveyed, there is a chance that the sample estimates may differ from the true population values they represent. The component of this difference that occurs because samples differ by chance is known as sampling error, and its variability is measured by the standard error of the estimate. There is about a 90-percent chance, or level of confidence, that an estimate based on a sample will differ by no more than 1.6 standard errors from the true population value because of sampling error. BLS analyses are generally conducted at the 90-percent level of confidence.

The CPS data also are affected by nonsampling error. Nonsampling error can occur for many reasons, including the failure to sample a segment of the population, inability to obtain information for all respondents in the sample, inability or unwillingness of respondents to provide correct information, and errors made in the collection or processing of the data. For example, respondents may round their hourly earnings to whole dollars when answering survey questions.

Minimum wage worker data, particularly levels, for each year are not strictly comparable with data for earlier years because of the introduction of revised population controls used in the CPS. For technical documentation and related information, including reliability of the CPS estimates, see www.bls.gov/cps/documentation.htm.

The principal definitions for the main concepts presented in this report are below.

Wage and salary workers. Workers age 16 and older who receive wages, salaries, commissions, tips, payments in kind, or piece rates on their sole or principal job. This group includes employees in both the private and public sectors. All self-employed workers are excluded whether or not their businesses are incorporated.

Workers paid at or below the prevailing federal minimum wage pertain only to workers who are paid hourly rates. Salaried workers and other nonhourly paid workers are excluded.