Total nonfarm employment in the Dallas-Fort Worth-Arlington Metropolitan Statistical Area stood at 3,639,100 in February 2018, up 96,000 over the year, the U.S. Bureau of Labor Statistics reported today. From February 2017 to February 2018, local nonfarm employment rose 2.7 percent, compared to the national rate of 1.6 percent. (See chart 1 and table 1.) Assistant Commissioner for Regional Operations Stanley W. Suchman noted that among the 12 largest metropolitan areas in the country, Dallas ranked second in both the rate of job growth and the number of jobs added. (See chart 3 and table 2; the Technical Note at the end of this release contains the metropolitan area definitions. All data in this release are not seasonally adjusted; accordingly, over-the-year analysis is used throughout.)

Employment in the area’s leisure and hospitality supersector rose by 19,000 since February 2017, the largest gain of any local supersector. More than half of the job gain was in the sector’s largest industry, food services and drinking places (+11,200). The supersector’s rate of job growth in the Dallas area, 5.3 percent, was more than double the nationwide advance of 2.1 percent. (See chart 2.)

Professional and business services added 13,700 jobs in the area from February 2017 to February 2018, the second-largest gain among the local supersectors. The Dallas area’s 2.3-percent annual rate of job growth compared to the U.S. increase of 2.4 percent. The Fort Worth-Arlington division added jobs at a faster pace than the Dallas-Plano-Irving division, 4.1 percent and 1.9 percent, respectively.

Locally, manufacturing and financial activities added 8,700 jobs each from February 2017 to February 2018. Local rates of job growth in both supersectors were faster-paced than those for the nation. Both metropolitan divisions added jobs in financial activities, but the rate of job growth in Fort Worth-Arlington, at 5.1 percent, was faster-paced than the 2.5-percent gain in Dallas-Plano-Irving. 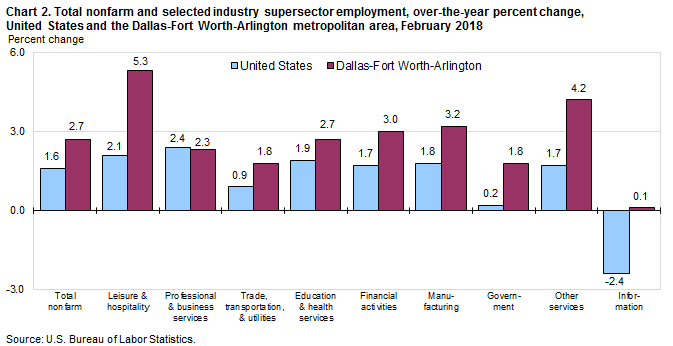 Dallas-Fort Worth-Arlington was 1 of the nation’s 12 largest metropolitan statistical areas in February 2018. All 12 areas had over-the-year job growth during the period, with the rates of job growth in 5 areas exceeding the national increase of 1.6 percent. Phoenix-Mesa-Scottsdale had the fastest rate of job growth, up 3.0 percent, followed by Dallas, up 2.7 percent. Chicago-Naperville-Elgin had the slowest rate of job growth, 0.7 percent, followed by Boston-Cambridge-Nashua and Philadelphia-Camden-Wilmington, at 0.9 percent each. (See chart 3 and table 2.)

New York-Newark-Jersey City added the largest number of jobs since February 2017, 124,200, followed by Dallas (+96,000) and Los Angeles-Long Beach-Anaheim (+93,400). Boston had the smallest employment gain over the year, adding 24,500 jobs, followed by Philadelphia (+25,800). Annual gains in the remaining seven metropolitan areas ranged from 67,100 in Houston-The Woodlands-Sugar Land to 30,600 in Miami-Fort Lauderdale-West Palm Beach.

Over the year, professional and business services added the most jobs in five areas: Boston, Houston, Miami, San Francisco-Oakland-Hayward, and Washington-Arlington-Alexandria. Education and health services gained the most jobs in three areas: New York, Philadelphia, and Phoenix.

The information supersector lost the most jobs over the year in six areas. Dallas was the only metropolitan area to have no annual job losses in any supersector.

Definitions. Employment data refer to persons on establishment payrolls who receive pay for any part of the pay period that includes the 12th of the month. Persons are counted at their place of work rather than at their place of residence; those appearing on more than one payroll are counted on each payroll. Industries are classified on the basis of their principal activity in accordance with the 2012 version of the North American Industry Classification System.

Area definitions. The substate area data published in this release reflect the delineations issued by the U.S. Office of Management and Budget, dated July 15, 2015. A detailed list of the geographic definitions is available at www.bls.gov/lau/lausmsa.htm.

More complete information on the technical procedures used to develop these estimates and additional data appear in Employment and Earnings, which is available online at www.bls.gov/opub/ee/home.htm. Industry employment data for states and metropolitan areas from the CES program are also available in the above mentioned news releases and from the BLS website at www.bls.gov/sae/.