Total nonfarm employment in the Houston-The Woodlands-Sugar Land Metropolitan Statistical Area stood at 3,169,300 in July 2019, up 93,600 or 3.0 percent, from one year earlier, the U.S. Bureau of Labor Statistics reported today. During the same period, the national job count increased 1.5 percent. Assistant Commissioner for Regional Operations Stanley W. Suchman noted that among the 12 largest metropolitan areas in the country, Houston ranked second in the annual rate of job growth and third in the number of jobs added over the year. (See chart 1 and table 1; the Technical Note at the end of this release contains metropolitan area definitions. All data in this release are not seasonally adjusted; accordingly, over-the-year analysis is used throughout.)

In the Houston metropolitan area, professional and business services added the largest number of jobs from July 2018 to July 2019, up 24,500. Job gains were widespread within the sector, including the architectural, engineering, and related services industry, which added 7,700 jobs, an 11.1-percent increase over the year. Houston’s professional and business services supersector employment rose 4.9 percent since July 2018, compared to the national increase of 2.2 percent. (See table 1 and chart 2.)

The leisure and hospitality supersector gained 9,900 jobs since July 2018. The local annual increase of 3.0 percent compared to the national increase of 2.0 percent.

The only local supersector to record an employment loss between July 2018 and July 2019 was information (-1,400). This industry lost jobs both locally and nationally. In Houston, employment fell 4.4 percent over the year, while nationally it declined 0.5 percent. 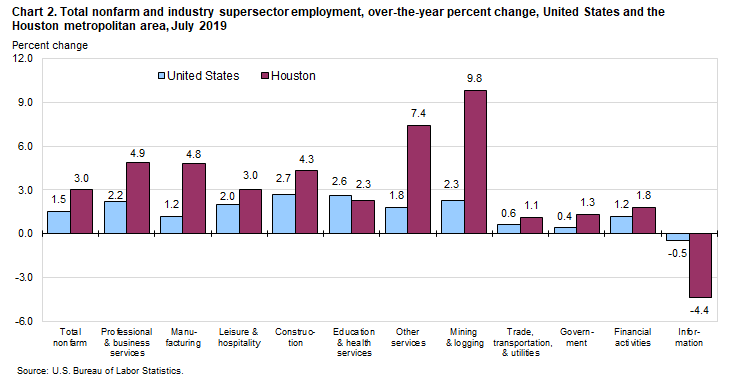 The information supersector recorded the largest employment loss in four areas: Chicago, Dallas, Houston, and Phoenix. Trade, transportation, and utilities lost the most jobs in three areas: Boston, Philadelphia, and Washington. Miami was the only area to experience no annual employment losses in among the supersectors since July 2018.

Area definitions. The substate area data published in this release reflect the delineations issued by the U.S. Office of Management and Budget, dated April 10, 2018. A detailed list of the geographic definitions is available at www.bls.gov/lau/lausmsa.htm.