Employment rose in 24 of the 25 largest counties in Texas from September 2017 to September 2018, the U.S. Bureau of Labor Statistics reported today. (Large counties are defined as those with employment of 75,000 or more as measured by 2017 annual average employment.) Assistant Commissioner for Regional Operations Stanley W. Suchman noted that job growth in Midland, Fort Bend, and Brazoria Counties ranked among the top 10 nationwide. Midland County ranked first with an increase of 11.9 percent, Fort Bend ranked fifth (6.5 percent), and Brazoria ranked seventh (5.5 percent). (See table 1.)

Employment and wage levels (but not over-the-year changes) are also available for the 229 counties in Texas with annual average employment levels below 75,000 in 2017. Among these smaller counties, 207 had average weekly wages below the national average in September 2018. (See table 2.)

All of the 25 large Texas counties recorded wage gains from the third quarter of 2017 to the third quarter of 2018. Over-the-year wage growth in three large Texas counties ranked among the top 50 nationwide: Midland (7.4 percent, 7th), Travis (4.4 percent, 44th), and Lubbock (4.3 percent, 49th). (See table 1.) Webb County, one of the lowest-paying counties in the nation, ranked 52nd in wage growth with a 4.2-percent gain. Montgomery County (0.9 percent) had the smallest over-the-year wage increase among the state’s large counties. Nationally, average weekly wages rose 3.3 percent.

Nationwide, 336 of the 349 largest counties had over-the-year wage increases. Chatham, GA, had the largest third quarter over-the-year wage gain at 8.5 percent. Chatham was followed by King County, WA (7.9 percent), and Santa Clara and Stanislaus, CA (each at 7.8 percent).

Among the largest U.S. counties, nearly three-fourths (255) reported average weekly wages below the national average in the third quarter of 2018. The lowest weekly wage was reported in Cameron, TX ($632), followed by Horry, SC ($635), and the Texas counties of Hidalgo ($662) and Webb ($698). Wages in these lowest-ranked counties were less than 30 percent of the average weekly wage in the highest-ranked county, Santa Clara, CA.

When all 254 counties in Texas were considered, all but 29 had wages below the national average. Forty-three counties reported average weekly wages under $700, 85 registered wages from $700 to $799, 57 had wages from $800 to $899, 27 had wages from $900 to $999, and 42 had wages of $1,000 or higher. (See chart 1.) The counties with the highest average weekly wages were concentrated around the larger metropolitan areas of Dallas, Houston, and Austin, as well as the smaller areas of Midland, Odessa, and Amarillo. Lower-paying counties tended to be located in the agricultural areas of central Texas, the Texas Panhandle, and along the Texas-Mexico border.

Employment and Wages Annual Averages Online features comprehensive information by detailed industry on establishments, employment, and wages for the nation and all states. The 2017 edition of this publication contains selected data produced by Business Employment Dynamics (BED) on job gains and losses, as well as selected data from the first quarter 2018 version of the national news release. Tables and additional content from Employment and Wages Annual Averages Online are now available at www.bls.gov/cew/cewbultn17.htm.

The County Employment and Wages release for fourth quarter 2018 is scheduled to be released on Wednesday, May 22, 2019.

Average weekly wage data by county are compiled under the Quarterly Census of Employment and Wages (QCEW) program, also known as the ES-202 program. The data are derived from summaries of employment and total pay of workers covered by state and federal unemployment insurance (UI) legislation and provided by State Workforce Agencies (SWAs). The average weekly wage values are calculated by dividing quarterly total wages by the average of the three monthly employment levels of those covered by UI programs. The result is then divided by 13, the number of weeks in a quarter. It is to be noted, therefore, that over-the-year wage changes for geographic areas may reflect shifts in the composition of employment by industry, occupation, and such other factors as hours of work. Thus, wages may vary among counties, metropolitan areas, or states for reasons other than changes in the average wage level. Data for all states, Metropolitan Statistical Areas (MSAs), counties, and the nation are available on the BLS Web site at www.bls.gov/cew/; however, data in QCEW press releases have been revised (see Technical Note below) and may not match the data contained on the Bureau’s Web site. 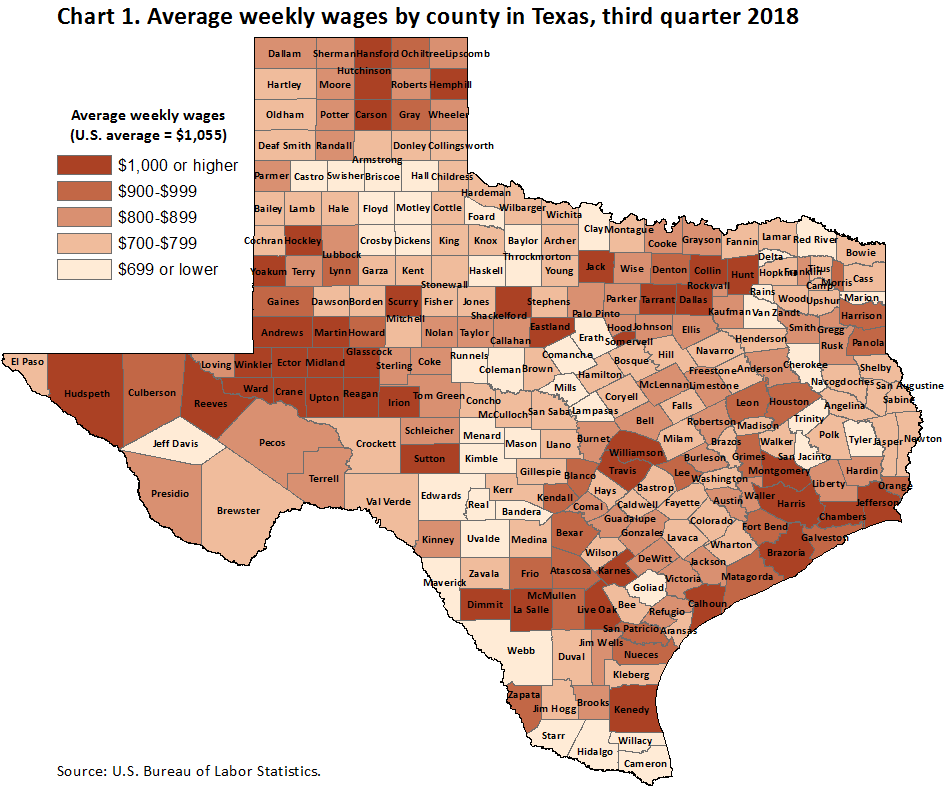