Gasoline prices averaged $2.668 a gallon in the San Francisco-Oakland-San Jose area in January 2016, the U.S. Bureau of Labor Statistics reported today. Regional Commissioner Richard J. Holden noted that area gasoline prices were up 9.1 cents compared to last January when they averaged $2.577 per gallon. San Francisco area households paid an average of 18.7 cents per kilowatt hour (kWh) of electricity in January 2016, down from 22.2 cents per kWh in January 2015. The average cost of utility (piped) gas at $1.299 per therm in January was 19.1 cents less than $1.490 price per therm spent last year. (Data in this release are not seasonally adjusted; accordingly, over-the-year-analysis is used throughout.) 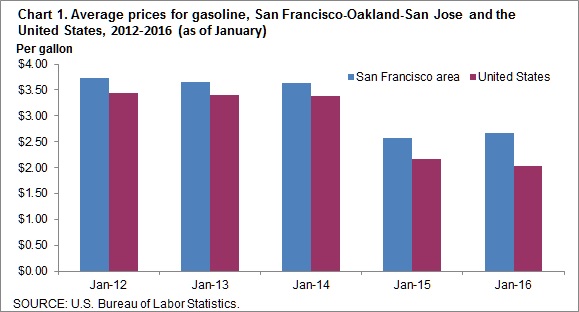 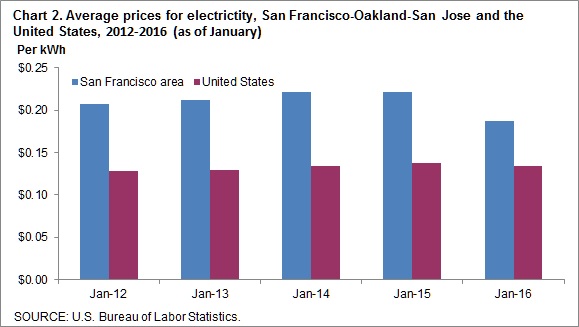 Prices paid by San Francisco area consumers for utility (piped) gas, commonly referred to as natural gas, were $1.299 per therm, or 44.7 percent above the national average in January 2016 ($0.898 per therm). A year earlier, area consumers paid 43.8 percent more price per therm for natural gas compared to the nation. In the past five years, the per therm cost for natural gas in January in the San Francisco area has varied between 8.3 percent and 44.7 percent above the U.S. average. (See chart 3.) 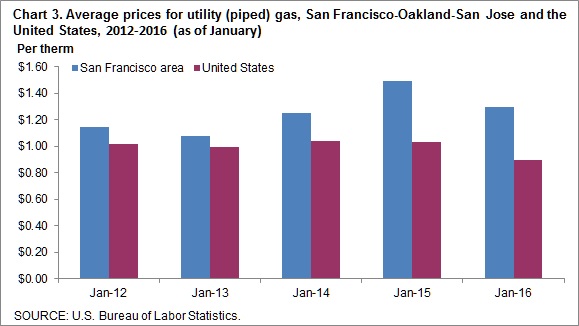 Price quotes for 40 therms and 100 therms of utility (piped) gas and for 500 kWh of electricity are collected in sample outlets for use in the average price programs only. Since they are for specified consumption amounts, they are not used in the CPI. All other price quotes used for average price estimation are regular CPI data.

With the exception of the 40 therms, 100 therms, and 500 kWh price quotes, all eligible prices are converted to a price per normalized quantity. These prices are then used to estimate a price for a defined fixed quantity.

The average price per kilowatt-hour represents the total bill divided by the kilowatt-hour usage. The total bill is the sum of all items applicable to all consumers appearing on an electricity bill including, but not limited to, variable rates per kWh, fixed costs, taxes, surcharges, and credits.  This calculation also applies to the average price per therm for utility (piped) gas.