Gasoline prices averaged $2.856 a gallon in the San Francisco-Oakland-San Jose area in May 2016, the U.S. Bureau of Labor Statistics reported today. Assistant Commissioner for Regional Operations Richard Holden noted that area gasoline prices were down 83.6 cents compared to last May when they averaged $3.692 per gallon. San Francisco area households paid an average of 20.2 cents per kilowatt hour (kWh) of electricity in May 2016, down from 23.3 cents per kWh in May 2015. The average cost of utility (piped) gas at $1.397 per therm in May was 8.8 cents less than $1.485 price per therm spent last year. (Data in this release are not seasonally adjusted; accordingly, over-the-year-analysis is used throughout.) 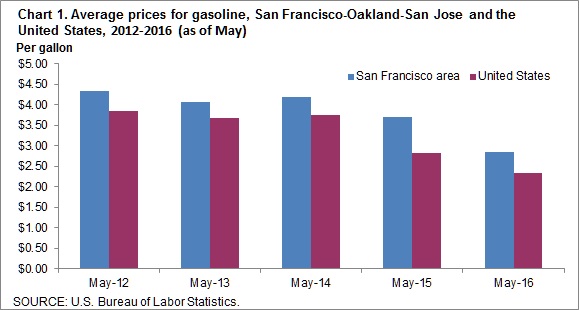 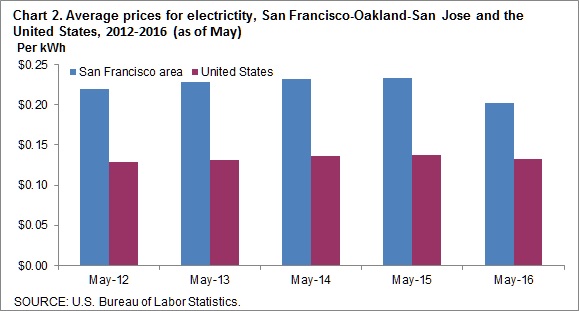 Prices paid by San Francisco area consumers for utility (piped) gas, commonly referred to as natural gas, were $1.397 per therm, or 59.3 percent above the national average in May 2016 ($0.877 per therm). A year earlier, area consumers paid 59.7 percent more per therm for natural gas compared to the nation. In the past five years, the per therm cost for natural gas in May in the San Francisco area has varied between 31.9 percent and 59.7 percent above the U.S. average. (See chart 3.) 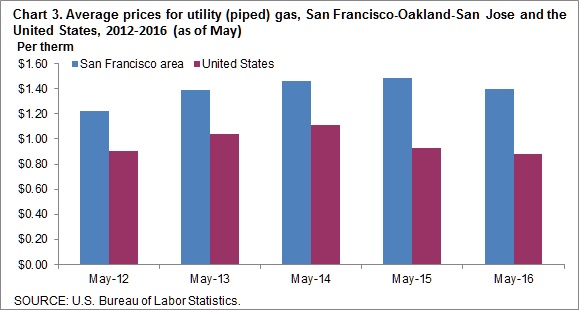