Over 13,000 nonfatal workplace injuries and illnesses were reported among Hawaii’s private industry employers in 2015, resulting in an incidence rate of 3.4 cases per 100 equivalent full-time workers, the U.S. Bureau of Labor Statistics reported today. (See table A.) Assistant Commissioner for Regional Operations Richard Holden noted that Hawaii was among 21 states that had an incidence rate of total recordable cases (TRC) greater than the national rate of 3.0. (Hawaii was 1 of 41 states and the District of Columbia for which statewide estimates are available. See Technical Note at the end of this release for more information about the survey.)

Hawaii’s findings from the 2015 Survey of Occupational Injuries and Illnesses include:

Of the 13,100 private industry injury and illness cases reported in Hawaii, 7,900 were of a more severe nature, involving days away from work, job transfer, or restriction—commonly referred to as DART cases. These cases occurred at a rate of 2.1 cases per 100 full-time workers. Eighty-five percent of the DART cases in Hawaii were incidents that resulted in at least one day away from work, compared to 57 percent nationally. Other recordable cases (those not involving days away from work, job transfer, or restriction) accounted for the remaining 5,300 cases in Hawaii, at a rate of 1.4, equal to the national rate.

Among the state and local government sector in Hawaii, 2,500 injury and illness cases were reported in 2015, resulting in a rate of 3.6 cases per 100 full-time workers. Nationally, the rate was 5.1. Fifty-six percent of injuries and illnesses reported in Hawaii’s public sector occurred among state government workers.

For 2015, occupational injury and illness data are available for 41 states and the District of Columbia. Twenty-one states, including Hawaii, had private industry TRC incidence rates higher than the national rate of 3.0 cases per 100 full-time workers in 2015. (See chart 1.) Twelve states and the District of Columbia had TRC rates lower than the national rate. Eight states had TRC rates that were about the same as the national rate. Factors such as differences in the composition of industry employment may influence state incidence rates and should be considered when comparing rates among different states. 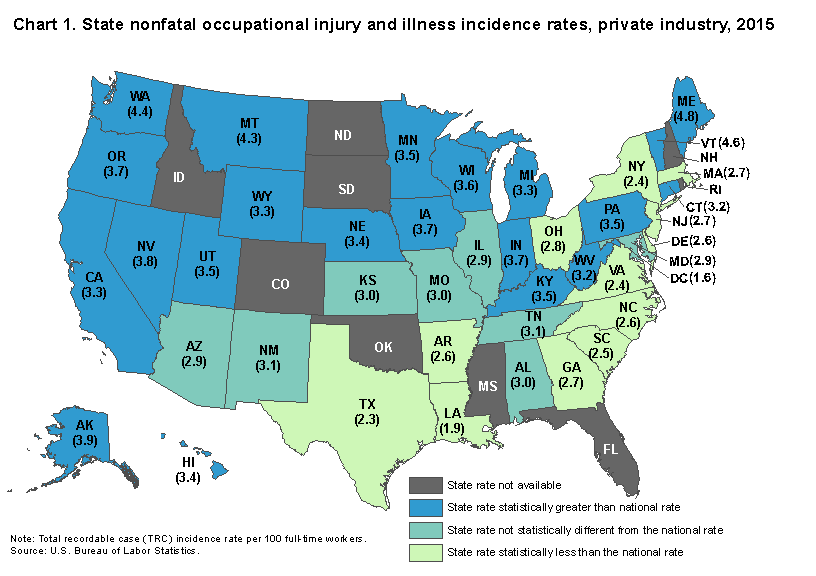 Additional occupational injury and illness data are available from our regional web page at www.bls.gov/regions/west.