Unemployment in the Los Angeles Area by County – May 2016

In May, Orange County had the lowest unemployment rate in the Los Angeles-Long Beach, Calif. Combined Statistical Area at 3.6 percent, followed by Los Angeles County at 4.3 percent, the U.S. Bureau of Labor Statistics reported today. Richard Holden, the Bureau’s Assistant Commissioner for Regional Operations, noted that Riverside County had the highest unemployment rate, 5.4 percent. Three of the five local-area counties had jobless rates equal to or above the national average of 4.5 percent. (See chart 1. The Technical Note at the end of this release contains the metropolitan area definition. All data in this release are not seasonally adjusted; accordingly, over-the-year analysis is used throughout.) 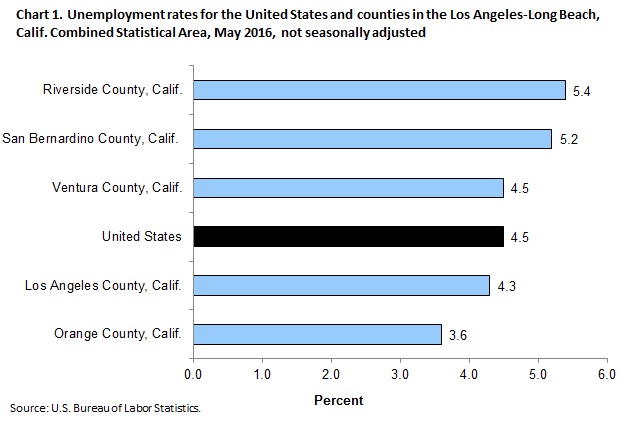 The Metropolitan Area Employment and Unemployment news release for June 2016 is scheduled to be released on Wednesday, August 3, 2016 at 10:00 a.m. (EDT).

Definitions. The labor force and unemployment data are based on the same concepts and definitions as those used for the official national estimates obtained from the Current Population Survey (CPS), a sample survey of households that is conducted for the Bureau of Labor Statistics (BLS) by the U.S. Census Bureau. The LAUS program measures employment and unemployment on a place-of-residence basis. The universe for each is the civilian noninstitutional population 16 years of age and over.  Employed persons are those who did any work at all for pay or profit in the reference week (the week including the 12th of the month) or worked 15 hours or more without pay in a family business or farm, plus those not working who had a job from which they were temporarily absent, whether or not paid, for such reasons as labor-management dispute, illness, or vacation. Unemployed persons are those who were not employed during the reference week (based on the definition above), had actively looked for a job sometime in the 4-week period ending with the reference week, and were currently available for work; persons on layoff expecting recall need not be looking for work to be counted as unemployed.  The labor force is the sum of employed and unemployed persons. The unemployment rate is the number of unemployed as a percent of the labor force.

Methods of Estimation. The LAUS program is a hierarchy of non-survey methodologies for indirectly estimating employment and unemployment in states and local areas. Statewide data are produced through a modeling technique that uses estimates of payroll jobs from the Current Employment Statistics survey and unemployment insurance claims counts from the state workforce agencies to mitigate volatility in the direct CPS tabulations of employment and unemployment, respectively. Data for labor market areas, such as metropolitan areas and metropolitan divisions, are produced through a building block approach and adjusted proportionally to state model-based totals. Data for counties within labor market areas are produced through a disaggregation technique. A detailed description of the LAUS estimation procedures is available in chapter 4 of the BLS Handbook of Methods at www.bls.gov/opub/hom/homch4.htm.

Annual Revisions. Labor force and unemployment data for prior years reflect adjustments made at the end of each year, usually implemented with January estimates. The adjusted estimates reflect updated population data from the U.S. Census Bureau, any revisions in the other data sources, and model reestimation. All substate estimates are reestimated and adjusted to add to the revised model-based estimates.

Area Definitions. The substate area data published in this release reflect the standards and definitions established by the U.S. Office of Management and Budget, dated February 28, 2013. A detailed list of the geographic definitions is available at www.bls.gov/lau/lausmsa.htm.