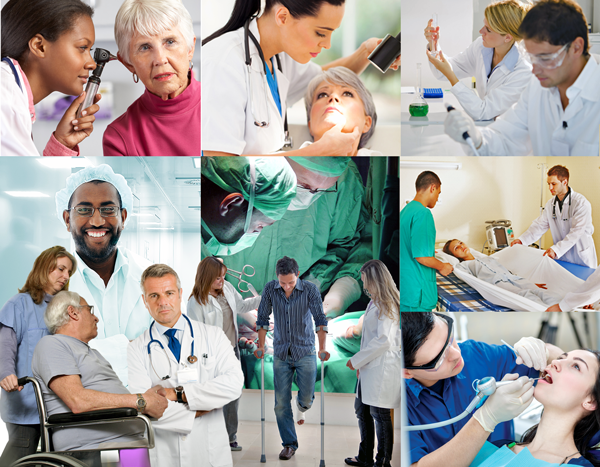 Employment and Wages in Healthcare Occupations

Whether you are filling a prescription, trying to find relief for a toothache, or looking for advice on proper nutrition, you probably will turn to a healthcare professional. Healthcare occupations represent a significant percentage of U.S. employment and are essential to the country’s economic health. Some of the largest and highest paying occupations are in healthcare fields. This Spotlight on Statistics uses May 2014 Occupational Employment Statistics data to examine employment and wages for healthcare occupations.

There are two groups of healthcare occupations: healthcare practitioners and technical occupations had employment of 7.9 million in May 2014, and healthcare support occupations had employment of 3.9 million. Nearly 82 percent of these jobs were in the healthcare and social assistance industry. Hospitals employed 3.8 million, doctors’ offices employed 1.5 million, and nursing care facilities (also called skilled nursing facilities) employed 1.1 million. Outside of healthcare and social assistance, other industries with large numbers of healthcare workers included federal, state, and local government (excluding state and local government schools and hospitals); retail trade, especially health and personal care stores; and educational services.

Healthcare practitioners and technical occupations made up nearly 34 percent of employment in healthcare and social assistance; healthcare support occupations made up another 19 percent. The largest healthcare occupation, registered nurses, had employment of 2.4 million and represented about 13 percent of industry jobs. Nursing assistants (1.3 million), home health aides (757,720), and licensed practical and licensed vocational nurses (596,750) also were among the largest healthcare occupations in the industry. Outside of the two healthcare groups, other large occupational groups included office and administrative support (15 percent of industry employment), personal care and service (10 percent), and community and social service (5 percent).

Four of the smallest healthcare occupations were specialist dentist occupations

Hearing aid specialists (with employment of 5,570), nurse midwives (5,110), and genetic counselors (2,180) are occupations that recently became available in the statistics.

Employment of registered nurses, by industry sector and selected industries, May 2014

Average wages for the highest paying healthcare occupations were above $200,000 per year, more than four times the national average wage of $47,230. Combined employment for the five high-paying occupations shown was 104,180. Anesthesiologists earned on average $246,320 per year and had employment of slightly over 30,000.

Several healthcare technicians and technologists had wages near the national average of $22.71

There were about 2.9 million health technologist and technician jobs in May 2014—nearly a quarter of healthcare occupations employment. The largest health technologist and technician occupations were licensed practical and licensed vocational nurses (695,610) and pharmacy technicians (368,760); the smallest were hearing aid specialists (5,570) and orthotists and prosthetists (7,830), who design artificial limbs, braces, and other medical or surgical devices and measure and fit patients for them.

Location quotients for medical transcriptionists, by state, May 2014

Montana
Hover over a state to see data.
Hover over legend items to see states in a category.
Source: U.S. Bureau of Labor Statistics.

The Midwest had high concentrations of medical transcriptionists

The average wage for nurse practitioners was more than twice the U.S. average for all occupations

Location quotient of nursing assistants, by area, May 2014

San Francisco-Oakland-Fremont, California (0.53), and Anchorage, Alaska (0.43), also had below-average employment concentrations of nursing assistants. However, average wages for nursing assistants in these areas were among the highest in the country at $36,630 and $36,920, respectively. In Dalton, Georgia (0.46), and Midland, Texas (0.49), where employment concentrations were also below the national average, annual wages were significantly lower at $20,070 and $25,910, respectively.

For employment concentration in nonmetropolitan areas and other data for nursing assistants, please visit the occupational profile page.

Dental hygienists had an average annual wage over $100,000 in some areas

Stella Fayer and Audrey Watson are economists in the Division of Occupational Employment Statistics, U.S. Bureau of Labor Statistics. Email: fayer.stella@bls.gov and watson.audrey@bls.gov.

This Spotlight on Statistics presents May 2014 estimates from the Occupational Employment Statistics survey. Occupational Employment Statistics estimates are published annually and measure occupational employment and wage rates for wage and salary workers in nonfarm establishments in the United States. The survey does not include the self-employed and owners, partners, and proprietors of unincorporated businesses, such as sole practitioners and partners in unincorporated medical and dental practices. More information about the survey is available at www.bls.gov/oes/oes_ques.htm and in the technical documentation at www.bls.gov/oes/oes_doc.htm.

Estimates available include cross-industry occupational employment and wage estimates for the nation; over 600 areas, including states and the District of Columbia, metropolitan statistical areas, metropolitan divisions, nonmetropolitan areas, and territories; national industry-specific estimates for NAICS sectors, 3-, 4-, and selected 5- and 6-digit industries; and national estimates by ownership across all industries and for schools and hospitals. Publicly available data are at www.bls.gov/oes/.

Percentile wages represent the value of a wage below which a certain percentage of workers fall. For example, the 90th percentile is the boundary between the highest paid 10 percent and the remaining 90 percent of workers in an occupation. For more information on percentile wages, see www.bls.gov/oes/oes_perc.htm.

More information on healthcare occupations is also available in the following articles and publications: