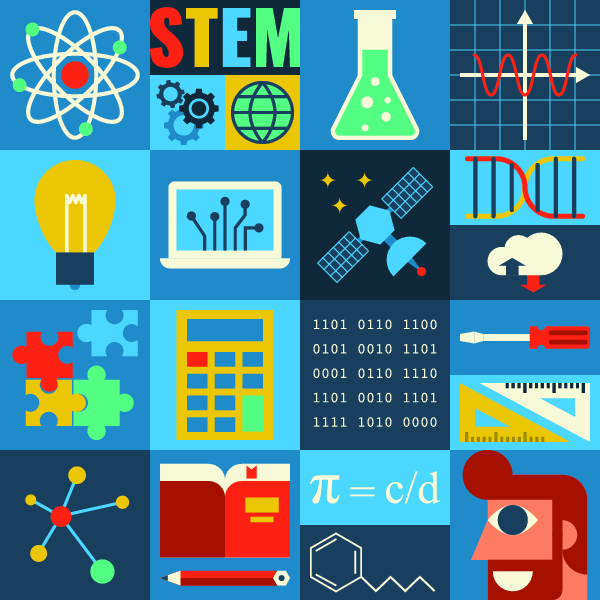 STEM occupations: past, present, and future

Not that long ago, if you were planning a trip to another country, you would probably go to the library to do some research, pick up a foreign phrasebook, and go to the travel agent to book your flight and a hotel. But now, all you have to do is reach for a smart phone. We made just a short leap in time, but an enormous leap in technological advances. Today, it would be difficult to imagine our daily lives without smart phones, applications (“apps”), online shopping, and many other conveniences made possible by the men and women working in science, technology, engineering, and mathematics (STEM) occupations. This Spotlight on Statistics uses data from Occupational Employment Statistics and Employment Projections to take a closer look at STEM occupations.

Seven out of the ten largest STEM occupations were computer related

The STEM group that is projected to grow fastest from 2014 to 2024 is the mathematical science occupations group at 28.2 percent, compared with the average projected growth for all occupations of 6.5 percent. This group includes occupations such as statisticians and mathematicians. Since this group has the lowest employment among the STEM groups in 2014, this growth will result in only about 42,900 new jobs over the period. The only STEM group that is projected to show little or no change is drafters, engineering technicians, and mapping technicians, with a slight projected decline of 1.4 percent, a decline of about 9,600 jobs.

Employment in computer occupations is projected to increase by 12.5 percent from 2014 to 2024, and due to its large employment size, this growth is expected to result in nearly half a million new jobs, far more than any other STEM group. The group projected to add the second largest number of new jobs from 2014 to 2024 is engineering occupations, with 65,000 new jobs.

Job openings show the combination of new jobs and jobs expected to result from workers permanently leaving occupations and needing to be replaced. The computer occupational group is projected to yield over 1 million job openings from 2014 to 2024. The smallest number of job openings projected are in the architects, surveyors, and cartographers group, at only 52,500 projected openings.

Nearly all of the 10 fastest growing STEM occupations that require a bachelor’s or higher degree for entry are in the computer and mathematics groups. Statisticians are projected to grow fastest from 2014 to 2024 with a growth rate of 33.8 percent. Biomedical engineers is projected to be the fastest growing engineering occupation at 23.1 percent. Operations research analysts and cartographers and photogrammetrists are expected to grow rapidly due to increased use of data analytics and map technology by businesses and governments as part of their decision making.

Between May 2009 and May 2015, over 800,000 net STEM jobs were added to the U.S. economy. The computer systems design and related services industry increased its STEM employment by over 300,000 jobs. Employment services, an industry that helps job seekers to find temporary or permanent employment, added over 86,000 STEM jobs. The data processing, hosting, and related services industry added almost 31,000 STEM jobs, and colleges, universities, and professional schools added over 29,000 STEM jobs. STEM employment in general medical and surgical hospitals increased by slightly more than 23,000 jobs.

STEM occupations made up nearly 67 percent of employment in the computer systems design and related services industry.  Applications software developers, who design or customize software to meet clients’ computer operational needs, made up about 14 percent of industry employment. The largest STEM occupations in this industry also included computer systems analysts (167,830), systems software developers (130,630), computer user support specialists (125,440), and computer programmers (117,720). Computer and information systems managers, who plan, direct, or coordinate information technology activities, made up nearly 74,000 jobs in this industry.

Some of the fastest growing STEM occupations are in computer systems design and related services. The rapid growth projected for these occupations is due in large part to the projected growth for the industry of 23 percent. Computer programmers are projected to decline in this industry from 2014 to 2024 due to the ongoing trend of outsourcing the work to firms located overseas to cut costs.

Nearly 900,000 STEM jobs were in the architectural, engineering, and related services industry

The architectural, engineering, and related services industry is projected to grow by 8.0 percent from 2014 to 2024. The projected growth is due to firms from other industries contracting architectural and engineering services from firms in this industry rather than employing engineers and technicians themselves. Emphasis on automation and software will lead to relatively fast growth in this industry for mechanical engineers. Demand for civil engineers working in this industry will come from the need to improve infrastructure such as roads, bridges, and transit systems, as the population grows.

Mechanical engineers were employed in a variety of industries

Industries with higher shares of STEM occupations typically had higher wages. STEM occupations made up over one-third of employment in professional, scientific, and technical services, which includes activities like computer systems design, engineering services, and research and development services. This industry also had one of the highest average wages, $77,570 across all occupations. Information ($70,440), utilities ($73,100), and management of companies and enterprises ($79,600) also had both high overall average wages and high shares of STEM employment. The industries with the lowest shares of STEM employment had among the lowest average wages: retail trade ($31,280) and accommodation and food services ($24,340).

States with higher shares of STEM jobs had higher wages

As a share of total employment, STEM employment varied from 3.3 percent in Nevada and Mississippi to over 9 percent in Maryland, Washington, and the District of Columbia. In general, higher shares of STEM employment were associated with higher wages. For example, the District of Columbia had both the highest overall average wage ($80,150) and one of the highest shares of STEM occupations. However, STEM employment wasn’t the only factor affecting wage differences. In addition to high concentrations of STEM occupations like statisticians, physicists, and environmental scientists, the District of Columbia also had above-average shares of other high-wage occupations like lawyers and management analysts, which contributed to its high wage level. New York was one of the highest paying states, but had a below-average share of STEM occupations.

Among metropolitan areas with high shares of STEM employment, the specific STEM occupations that were prevalent differed. As a share of total employment, California-Lexington Park, Maryland, had nearly 49 times as many aerospace engineers as the United States as a whole, as well as high concentrations of several other types of engineers and engineering technicians. San Jose-Sunnyvale-Santa Clara, California, had high concentrations of occupations related to computers and information technology, such as computer hardware engineers, computer and information research scientists, and software developers. Corvallis, Oregon, had high shares of occupations related to conservation, wildlife, and agriculture, including zoologists and wildlife biologists, agricultural and food science technicians, and soil and plant scientists.

Occupational Employment Statistics estimates are published annually and measure occupational employment and wage rates for over 800 occupations for the nation, states, and nearly 600 metropolitan and nonmetropolitan areas; and for more than 460 industry classifications at the national level. The survey covers wage and salary workers in nonfarm establishments and does not include the self-employed and owners, partners, and proprietors of unincorporated businesses. More information about the OES survey is available at www.bls.gov/oes/oes_ques.htm and in the technical documentation at www.bls.gov/oes/oes_doc.htm. Publicly available data are at www.bls.gov/oes/.

The Employment Projections (EP) program develops industry and occupation employment projections at the national level for over 800 occupations and over 300 industries. The projections are released every two years and are 10-year projections. EP also develops the Occupational Outlook Handbook (OOH), the federal government’s principal career guidance publication. The OOH includes information about job duties, education and training, and career outlook for hundreds of occupations. More information about EP and detailed projections data are available at www.bls.gov/emp. The OOH is available online at www.bls.gov/ooh.

Although this Spotlight presents selected 2009-2015 employment comparisons using the Occupational Employment Statistics data, OES data are not designed for making comparisons through time, and such comparisons should be interpreted with caution. More information on OES data and time series analysis is available in frequently asked question F.1 at www.bls.gov/oes/oes_ques.htm#other.

More information on STEM occupations is also available in the following articles and publications: