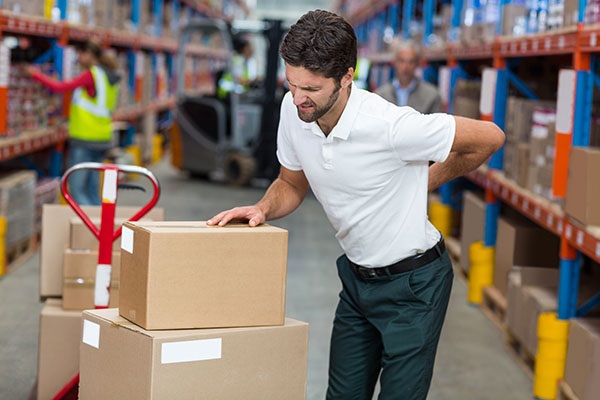 Since 1972, the Injuries, Illnesses, and Fatalities program has collected data on work-related injuries, illnesses, and fatal injuries. The 25 years of data now available show that workers are incurring fewer injuries and fatalities on the job, but also show that there is still work to do to make workers safer while they are on the job. //QCT PDF Reactor V11 Upgrade testing//

In 2016, there were approximately 14 deaths per day, which means a worker died from a fatal work injury every 102 minutes.

In 2016, the fatal injury rate for self-employed workers, 13.1 fatalities per 100,000 full-time equivalent workers, was more than 4 times the rate for wage and salary workers, which was 3.0 fatalities.

Nonfatal injury and illness cases that involved one or more days away from work, or a job transfer or restriction made up roughly half of all nonfatal injuries in private industry in 2016. The remaining cases were those where workers did not miss any work and were not restricted or transferred. The proportion of job transfer or restriction cases, where the worker is on restricted duty or transferred to another job as a result of the injury, has grown over the past 25 years.

SOII collects data from establishments in the public sector (state and local government) as well as the private sector.

There are significant differences in incidence rates between establishments in the private, state, and local government sectors. It is worth noting that the make-up of industries and occupations for government is different from the private sector and that job duties vary greatly.

Injury, illness, and fatality data are available by industry and occupation

Looking at both occupation and industry characteristics of fatal workplace injuries provides additional insight. For example, heavy tractor-trailer truck drivers was the occupation with the most fatal occupational injuries for the private manufacturing and the oil and gas extraction industries. 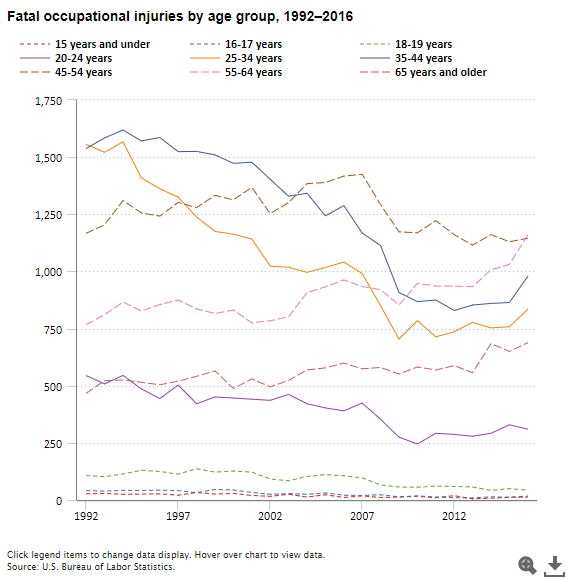 Older workers face a greater risk of being killed at work than workers as a whole. In 2016, the rate of fatal injury for all workers was 3.6 deaths per 100,000 full-time equivalent workers. For workers age 65 and older, that figure was 9.6.

SOII collects demographic information on workers injured or made ill while on the job. Workers age 55 to 64 had a higher risk of injury or illness than workers in other age groups, except workers age 16 to 19.

Workers in the 16 to 19 age group had a higher injury rate for contact with objects and equipment than for falls, slips, and trips. The opposite was true for workers age 65 and older. This could be the result of different types of work duties or different types of injuries incurred. 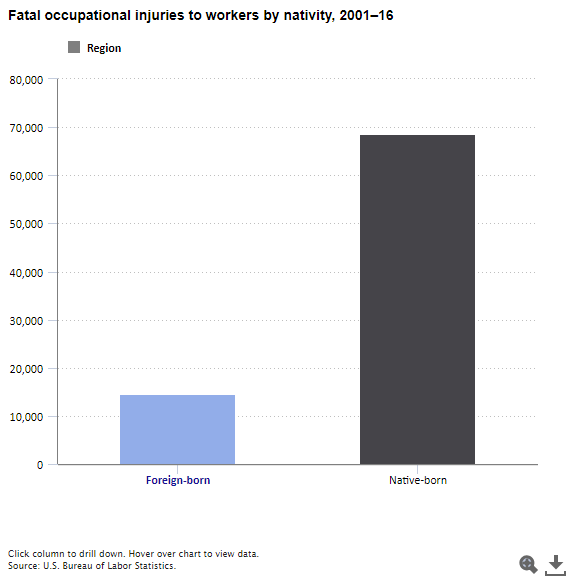 Mexico was the most common birthplace among fatally injured foreign-born workers from 2001 to 2016 with 6,046. The next most frequent countries of birth were Guatemala (545), El Salvador (533), and India (533). Data on race and Hispanic and Latino origin are also available from CFOI.

The back was the most frequently injured body part in 2016

SOII collects data on the nature of injury and the part of body affected for cases involving days away from work.

The most frequent events among nonfatal injuries and illnesses resulting in days away from work are overexertion and contact with objects or equipment. Injuries and illnesses resulting from overexertion and bodily reaction had significant declines from 1992 to 2016, dropping from over 1 million cases in 1992 to 300,000 in 2016. The same can be said for contact with objects or equipment, dropping from 638,000 cases in 1992 to 233,000 in 2016.

Musculoskeletal disorders (MSDs) include cases that comprise particular natures of injury (such as sprains and strains or carpal syndrome) and events or exposures comprising of repetitive motion or exertion. The full description of nature of injury and event or exposure categories that are used to determine musculoskeletal disorder cases can be found at Occupational Safety and Health Definitions.

The Census of Fatal Occupational Injuries is a federal-state cooperative program that has been implemented in all 50 States and the District of Columbia since 1992. Information about each fatal workplace injury is obtained by cross-referencing source records, such as death certificates, workers' compensation reports, and Federal and State agency administrative reports. Additional background information can be found in the CFOI section of the "BLS Handbook of Methods."

The Survey of Occupational Injuries and Illnesses uses employer-reported survey data to estimate rates and counts of nonfatal injuries and illnesses among U.S. workplaces. Business establishments have been providing occupational injury and illness data to SOII since 1972. Additional background can be found in the SOII section of the "Handbook of Methods."

See the Employed persons in agriculture and nonagricultural industries by age, sex, and class of worker and Employed persons by detailed industry and age tables for more data on how employment by age has changed. //QCT PDF Reactor V11 Upgrade Testing//